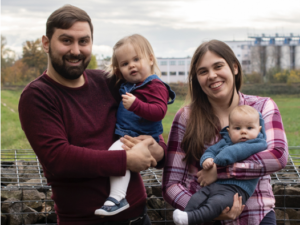 By Caitlyn Lucchi, All Nations missionary in the Czech Republic

We moved twice before I was seven years old, but I don’t remember much about it. My memories start in Iowa, where I lived in the same house, in the same town, for twenty years. When you live twenty years in a place you feel settled, secure – not like a suffering servant. You hang out with the same people, shop at the same stores, drive the same routes, walk the same sidewalks, over and over again. Like a stone that the waves and sand have polished until it’s smooth to the touch, I knew myself, what I enjoyed, what I disliked, and how I fit into my world.

Then I started dating a missionary. After a few months of prayer I experienced my own call to missions. I married him, and my whole world changed.

Suddenly I was living overseas. Everything was large and strange and gray, so very gray. We moved three times in three years, to three different homes and two different cities. Like Abraham and Sarah roaming the promised land in tents, travel, whether across country or to neighboring countries, became the norm. Even starting a family, and having two babies in rapid succession, didn’t stop us. Our eldest flew to three different continents before she was seven months old.

Growing up in Iowa, we had a strong sense of family. We joked that anyone who left Iowa would be “back some day” to settle near relatives. After having my own children, I understand why. There’s no break, no grandparents or aunts and uncles to stop by and watch your child while you snatch a few moments to clean or sleep. It’s just you, and the new friends you’re trying to meet, or your new overseas “family” who you hope won’t judge your disaster of a house as you try to communicate in a new language and bridge new cultural divides.

A Shred of Glass, Fractured and Broken

New new new. Everything is new. And none of it is easy. The spiritual darkness over our city brings a feeling of heaviness that we slog through daily. The hurting, broken people we strive to build relationships with bring their own personal and spiritual baggage into our home and lives. Bearing one another’s burdens might fulfill the law of Christ (Galatians 6:2 ESV), but it is very wearing, especially when you realize that “country shock” and “culture shock” have left you just as broken and hurting as the people you came to help.

Recently, culture shock has left my emotions in a constant swirl. I described it to my husband as “the land literally trying to get you,” like a horror film monster. I’ve changed more and given up more and cried harder in the last three years than I have in my whole life. I no longer feel like a polished stone. Instead, I more resemble a shard of glass, fractured by some mighty hand. Some days I ponder what it would be like if everything in my life just stopped. I fantasize about running back to Iowa, where things were known, constant, stable. And all that really holds me back is the small, nagging knowledge that I’ll never fit back into the same hole in the puzzle I created when I left. I’ve changed too much.

Take Up Your Cross

Paul, in his letter to the Philippians, writes, “Have this mind among yourselves, which is yours in Christ Jesus, who, though he was in the form of God, did not count equality with God a thing to be grasped, but emptied himself, by taking the form of a servant, being born in the likeness of men. And being found in human form, he humbled himself by becoming obedient to the point of death, even death on a cross” (2:5-8 ESV).

Jesus left paradise for a finite, earthly body among the Jewish working class at a time when his particular brand of “heresy” would literally have him tortured and killed. Jesus’ message and the life he lived before their eyes wasn’t “achieve happiness at all costs,” “go where you feel accepted,” “find your perfect home.” Instead, it was to take up your cross daily and follow him (Luke 9:23).

Serving God where you are as a stone that is settled, happy, and polished isn’t wrong. But it also isn’t wrong to be a jagged piece of discarded glass, trash in the eyes of others, but beautiful in the sight of God. The hurting, broken souls we meet each day are watching to see how we follow Jesus, not just when life is good, but in the normal day-to-day, through all the ups and downs.

They need to see us when we don’t know enough of their language to ask for help at the grocery store. They need to be allowed to step in when we’re exhausted and have no family member to hold the screaming baby and frantic toddler. Our neighbors need to hear us when the holidays leave us so homesick we’re ugly crying in the closet, or so frustrated and tense we’re only seconds from giving up. They want to know if there is hope, if struggles ever end, if pain has meaning, if home ever has a chance of being safe.

A Suffering Servant in a Watching World

The suffering servant suffers alongside those who suffer. It is a common bond, a shared humanity, a sign that they, and we, can all find hope in a Christ who takes our shattered, broken lives and casts them out, out, out, as far as he can throw, into life’s wild, tumbling sea. We will feel battered, tossed about, pounded by the waves, but, someday, some searching beachcomber will catch sight of us among the polished rocks, a beautiful, colorful piece of sea glass, with a story to tell of God’s goodness in the midst of hardship.

So take that first step. Ask for prayer, ask for help, shed a tear on another’s shoulder.

Be the suffering servant a hurting world is waiting to see.

Through the season of Lent, All Nations Kansas City is sharing weekly unreached people groups to pray for and reflections on what missionaries give up in order that Jesus might be worshiped by all peoples. We invite you to follow along on Instagram, Facebook, or Twitter!