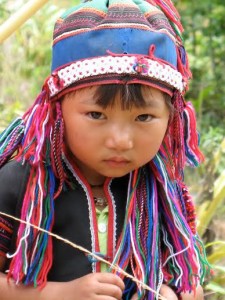 The Akeu people were an unreached people group in northern Thailand, formerly having no written language. However, they have been handing down the “Buffalo Skin Legend” for 800 years. Though simple and seemingly far-fetched, this story has been one of the keys that has unlocked the gospel and opened doors for evangelism for the Akeu. They tell it like this:
God called all the people groups before Him. He gave each people group His Word in a different way. To the Akeu, God chose a high priest to give His Word written on a Buffalo skin. (Buffaloes are a highly esteemed animal to the Akeu, like a bald eagle would be to Americans.)

Our team has recorded Akeu legends with them directly, in the Akeu language. They then have retold the Buffalo Skin legend in Akeu, relating the legend to Jesus, the Word of God.

​Likewise God had put his fingerprint in the Akeu culture through another of their beliefs regarding the four gates around their village. There are no fences, but the Akeu insist on walking through the gates and never around them. “That’s how the evil spirits fall off,” they say. Our team shared John 10 with them, where Jesus explains that He is The Gate, and that if you believe in Jesus, all curses fall off of you forever.

Finally, the Akeu do not herd sheep, but our team noticed they would periodically sacrifice water buffalos and sprinkle the blood as atonement for their sins. So they shared with them that Jesus is the water buffalo who takes away their sins once and for all.